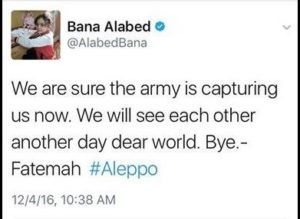 Imagine you are seven years old; every morning you wake up to news of more dead friends and relatives. You hear bombs exploding only a few miles away every single day. You watch your neighborhood crash and burn. You might even watch someone get murdered right in front of you.

This might not sound like a normal day to you, but it is the terrifying and unfortunate reality for the people of Syria.

A distressed mother of a young Syrian girl named Bana started tweeting under her daughter’s handle about three months ago. Since then, the mother, Fatemah, has been posting accounts of violence and attacks taking place in Aleppo where they live. Then this week, the account vanished.

Followers of the Alabed family’s journey were shocked. Some even speculated that their hideout had been discovered, and their Twitter account deleted by the Syrian army.

The hashtag, #WhereIsBana, began trending as people drew more and more awareness to the terrible situation in Aleppo, including author J.K. Rowling who retweeted pictures of Bana with the hashtag. Apparently Bana’s mother had tweeted Rowling earlier with a request for a copy of the first Harry Potter book to replace Bana’s that was destroyed by a bombing of their home.

On December 5, 2016, a source informed the BBC that Fatemah and Bana were safe in an undisclosed location. @AlabedBana has been reactivated within the last two days on Twitter.

Syria has been in a Civil War since 2011. About 4.8 million Syrian refugees have fled the country for nearby countries such as Turkey, Lebanon and Egypt. And another 6.6 million Syrians are displaced in their own country.

Bana and Fatemah’s idea to reach out through social media about the struggles they face in Aleppo was a bold decision and plants seeds for others being persecuted in Syria, or anywhere else, the courage to speak up about their mistreatment in a way that will give a voice to the voiceless.