The process of getting recruited to play football in college is somewhat different than most sports.  Because football is a limelight sport for many universities, recruitment of high school players is a priority for most college-level football programs. In comparison to football players, other high school athletes often have to put in additional time and effort in order to even be considered for recruitment.

Oftentimes college coaches will come to high school practices and look for potential recruits, or players will attend “junior day” at a college they are interested in. The coaches have a great recruiting network so they can easily find potential recruits. Once a player decides to make an official visit to the college the coaches roll out the red carpet. They want to make the process as easy as possible for the recruits. When the player has the talent needed, the coaches will put in the effort to make the recruiting process a fun and easy-going experience. Being recruited for football is often a more accessible avenue than sports like volleyball, field hockey, basketball, or cheer. For many athletes, playing in college requires resources they may not have access to, like money and  time for extra practices.

Field hockey is one of those sports that often gets overlooked because it is not as widespread across the nation. All Saints’ junior, Corynne Hammit, is one of the chosen few on the varsity field hockey team. She plans to continue her field hockey endeavors through club hockey, and hopefully go on to the collegiate level. Hammit is in her third year of playing field hockey outside of school, and since field hockey is not as well known in Texas as football or volleyball, Hammit has to travel all the way to Houston for her club.

“I go to Texas Pride Field Hockey Club in Houston. It’s the only field hockey club in Texas, so that’s where I have to go! I go down pretty much every weekend to Houston. It’s roughly a 9 hour trip every weekend. I normally don’t get home on Sunday until around midnight. Along with all the time that goes into this I think a rough estimate for me to play club every year including the trips, tournaments, and hotels would be about $5,000.”

It is plain to see how much time and money is sacrificed for a passion that Hammit wishes to apply herself to. Club sports are a much better environment to go to the next level, but Hammit also has loved playing for All Saints’ with a more stress free attitude.

Katie Karbo, All Saints’ senior and future Houston Cougar volleyball player, had lots to tell me on her experiences in club volleyball, and the process of talking to and getting recognized by coaches and the different ways of approaching recruitment. Karbo has been playing club volleyball since she was 9 years old. She has spent 8 out of her 9 years at Texas Advantage Volleyball club, which has been ranked the highest club in the state for 12 years straight and ranked highest club in the nation for 3 years straight.

Karbo plays the position of libero, the strongest and most roaming defensive player on a volleyball team.

“Being a libero is one of the hardest positions to get recruited for because on a college team there are only about three of them, whereas outside hitters usually figure up to about 6. Liberos never get full ride scholarships because most teams want the big power hitters so they will put all of the money to the hitters, and the leftovers to the liberos.”

I also asked her about the time and money needed to fulfill her dreams of being recruited. It amazed me how much time and money she had spent on just volleyball. Volleyball never stops for this top recruit!

“We pay $7,000 for a club season, and that’s not including airfare. I have spent 8 months out of every year just doing club, and right as club ends, school volleyball starts. TAV made the recruitment process a bit easier for me, they’re really good at getting their players recognized. To become really good it takes a lot of practice, dedication, hard work and time management.” 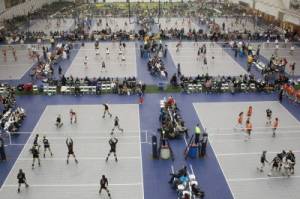 A recent 2015 alum, Max Vrana, went on to play basketball at the collegiate level at Hendrix College in Arkansas. Before he started this new chapter in his life Max played club basketball for five years. He attributes his accomplishments to club basketball, his sacrificed time and money, and sheer dedication and drive to make his dream to play college sports a reality.

“I most likely wouldn’t be playing college basketball if I hadn’t done club. I went to camps and did the whole online recruiting thing and the majority of my recruitment came from club tournaments. I couldn’t tell you an exact number, but I’ve spent thousands of dollars from middle school to now with camps, tournaments, club, trainers, and the online recruitment site I used.”

Once again, we see an instance where the process is based on sports outside of school, and lots of time and money, whereas football players, need not worry about their highlight videos being sent out, getting signed up for the right camp and having the means to pay for it, and having the time for it because of prior commitments to out of school sports. Most football players get recruited straight from practices or games, where Max is the perfect example of a self-run and represented athlete.

Almost anyone can try out for high-school cheer, as long as they have basic dancing and jumping skills. It only takes a few hours for everyone to try out and get their results back. Each cheerleader is required to do a run-in, 3 jumps, and a cheer, individually, and then a chant and a dance with the group. Although making the varsity cheer squad can be difficult, trying out for college cheer requires elevated level of skills.

Unlike football, cheerleaders cannot be recruited straight on the team; they are still required to attend tryouts. In order to even be considered to tryout, most cheerleaders participate on competitive squads and take multiple private lessons a week, which can be quite expensive. College squads require advanced tumbling and stunting skills that most high schools don’t even practice. Many cheerleaders create highlight videos and post them on Youtube for coaches to see and hopefully contact them if interested. Some schools like UT require a video, similar to an interview, before you can even tryout. In addition to tryouts, many coaches require interviews, so the cheerleaders have to study a lot about the colleges before their interview  in order to be prepared. Tryouts in college are also much longer than high school. They can last for multiple days, and there are cuts and callbacks throughout the week. Becoming a college cheerleader is a long process the requires time, money, and a lot of preparation.

Current All Saints’ varsity cheerleader, Maddie Bailey, has cheered since kindergarten and has mastered incredible skills. She has done competitive cheer at The Cheer Connection, Maverick, and most recently Cheer Athletics in Plano on the LadyKatz, a level 6 team which is the highest level. Maddie is well known in the cheer community, and is often referred to as a “cheerlebrity.”

“I like being able to do skills that most people can’t,” Bailey said.”You have to have a lot of body control and coordination to cheer. Flying at a collegiate level basket toss literally makes me feel like I’m flying. It’s a feeling that is hard to come by and that’s mostly why I love cheering. There is truly no other feeling in the world like flying; it’s indescribable. I love cheer because of the adrenaline rush and spirit you feel when the crowd gets involved.”

Due to lack of time we could not address all sports. Tennis, track, golf, swimming, soccer, softball, and baseball recruits all have to go through a similar process that requires extra effort, time, and money.