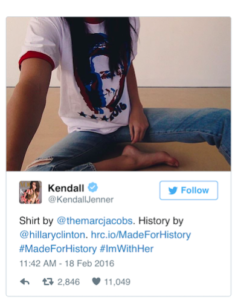 Imagine being Kendall Jenner, tweeting an “all natural selfie” (with just a little makeup on of course) just minutes after waking up, snapchatting a gym picture, or instagramming the acai bowl you had for breakfast. Celebrities love to give their fans a play-by-play, and their fans look forward to these updates.

Along with sharing their daily lives, many celebrities have shared who they’re voting for in this controversial 2016 election. But the big question is, how much of an effect do celebrity endorsements have on voters?

These celebrities use Twitter along with other social media platforms to gather support for their candidate of choice. The combined total following of Kendall Jenner, Snoop Dogg, Beyonce and Katy Perry (all Clinton supporters) is 142.8 million. In contrast, Donald Trump supporters seem to be generally less active on social media. For instance, Willie Robertson, Sarah Palin, Kirstie Alley and Hulk Hogan only have combined Twitter power of 6.3 million.

Young voters might be swayed easily by what their favorite celebrities say online. It’s easy to get caught up in the entertainment of it all, but I hope these inexperienced voters use it as an opportunity to dig deeper into the real issues. It’s important to research the facts and gain a unique perspective on what you believe is right.