Amazing isn’t it? Just one swath from a shadow brought Americans together and changed their lives forever. Total eclipses happen regularly, but what makes them so rare is that they rarely occur in specific areas. The last total eclipse in Dallas happened in 1623! Total solar eclipses occur when the New Moon comes between the sun and Earth and casts the darkest part of its shadow, the umbra, on Earth. A full solar eclipse, known as totality, is almost as dark as night. 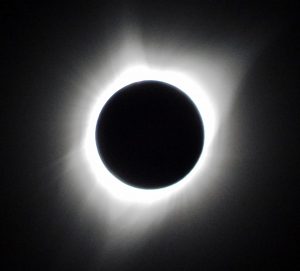 When and where is the next total eclipse? The next total eclipse in the United States will occur on April 8, 2024. Even better, totality will be visible here in Fort Worth! So start planning now for the biggest eclipse party of your lifetime and get ready to see shadow bands, a diamond ring, the sun’s corona, Bailey beads, and the sun’s chromosphere. Sounds beautiful. #pumped