The question stays the same in the college football standings: Can anyone pass up No.1 Ohio State? With the Ohio State’s win, they stay atop the top 25 for 8 weeks in a row. With major changes in the AP top 25 poll, the Buckeyes have stayed perfect and remained the leader of the pack, but there were significant changes is the top 4. The playoff picture at this moment has changed drastically from the beginning of the season, and looks to keep changing throughout the season. With big losses from No.20 Cal, No.9 Florida State, and No.3 Utah, the top 25 has been shaken up.

Former No.3 Utah suffered a loss to the unranked University of Southern California (USC) and fell 10 spots to No.13. Utah had a short 2 weeks in the top 10 with an undefeated streak, but their success came to a heartbreaking end because of their loss to USC. Because of their loss, Clemson took over the number 3 spot and LSU jumped past TCU for number 4, pushing TCU back to number 5, out of the playoff picture. For now.

Another big loss was No.9 Florida State Seminoles vs. unranked Georgia Tech. It seemed like an automatic win for the 2013 National Champion Seminoles, but Georgia Tech had different ideas. With a win in the sights of the Seminoles, Lance Austin a Georgia Tech specialist, blocked a game winning field goal and returned it for a game winning touchdown on the last play of the game. For the second time this season, a game has ended with a ranked team losing on a special teams mistake on the last play (week 8: Michigan vs. Michigan State). 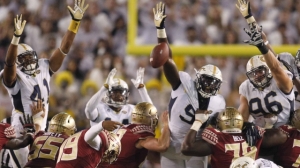 At the end of Week 8, the final standings were set with Ohio State still leading the pack. Baylor still running over teams, Clemson jumping to number 3, and TCU getting passes by LSU for number 4. All teams know that there are countless weeks left in the season, and as the season has already shown, anything can happen.