A pro-Islamic organization recently took serious offense to a new 9/11 memorial located in Owego, New York. The group, known as The Islamic Organization of the Southern Tier, wrote a high-strung letter expressing their outrage towards city leaders for allowing the memorial to be publicly displayed.

Many New York Muslims were insulted by the text written on the memorial, as it described the nineteen radical Muslims who were responsible for the events of 9/11 as “Islamic terrorists.” These people believe that the phrase “Islamic terrorists” should not be used because the terrorists who committed these awful acts of chaos were not real Muslims.

City manager Donald Castellucci received the group’s letter, and stated to Fox News that he “…sent a them (The Islamic Organization of the Southern Tier) an email saying that I disagreed with their premise 100 percent.” Castellucci also stated that he would not be changing the text on the memorial, as he strongly feels that the description accurately depicts the extremists who committed the horrible crimes. The text on the memorial is photographed below. 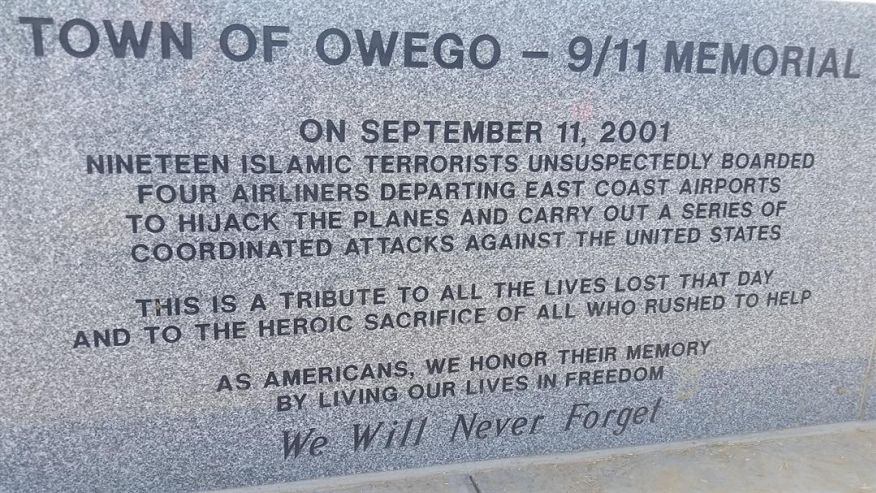 Todd Starnes, a journalist for Fox News, states in an article that “the facts surrounding 9/11 are very clear. Islamic radicals committed jihad on American soil. They were not shouting, “Jesus Saves” when they flew those jetliners in the buildings.” The monument will be continue to be dedicated this Saturday, as planned.

One thought on “9/11 Memorial Controversy”